Stigma and Discrimination In the Media 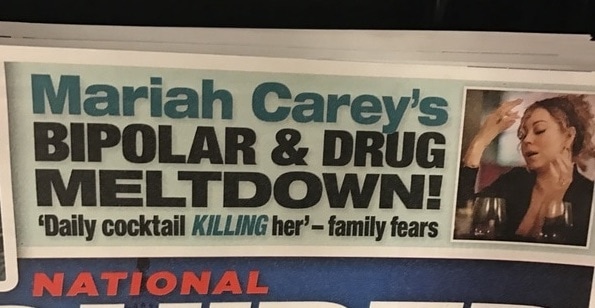 One of the most frustrating aspects of having a mental illness is the way that it is demonized in the media. And, there are three recent examples that I want to point to that show how people with mental illness are still stigmatized and discriminated against through media portrayals that are incorrect and, honestly, unfair.

First, we come to a movie that is coming out Jan. 20. It is called Split and comes from writer and director M. Night Shyamalan. The premise seems to be that a person, played by James McAvoy, has dissociative identity disorder. DID used to be referred to as multiple personality disorder. And, it seems. McAvoy’s character has 23 distinct personalities with one, The Beast, lurking beneath.

McAvoy’s character kidnaps three girls and holds them captive while waiting for The Beast to appear and do what happens in horror movies. The idea being that McAvoy has to cycle through all of these different identities and then we come to the terrible monster that lurks at the bottom.

So, Split is just one more move on the part of the media to portray those with mental illness as being violent and perpetuating myths instead of developing a real understanding of what it means to have a mental illness, especially, in the case of Split, dissociative identity disorder.

If Split was the only problem, though, that would be preferable to the current situation. However, we now have newspeople who like to spout off and call people they do not like “insane” and “mentally ill.”

The classic case for this is Keith Olbermann. As evidenced by the recent tweet captured below, Olbermann (and a lot of others) have taken to calling their political opponents “insane” or “mentally ill” or “crazy” or some other such term used in a completely derogatory way.

The problem with this is that it is name-calling and the name that someone is calling is actually a disease. It would be like calling someone a “diabetes” or a “concussion.” But, it goes further than that because at times we can call someone a name and use it metaphorically. However, for Olbermann and many others there is no metaphor to be tied to what is happening with their political opponents. For example, you might call someone a “cancer” but not mean they are literally cancer. In the way that the words are used here, though, they mean that their political opponents are literally “insane” or “crazy” or “mentally ill.” The trouble being that they do not know if this is the case or not. They are just throwing out words to hurt….and the words they are using to hurt others have real life people behind them.

The way that “insane” and “crazy” and “mentally ill” have been used in this election cycle reminds us that these terms are still loaded with stigma and discrimination. They have been used as bombs to hurt others while being completely unaware of the fact that there are literally people with mental illness who are in no way like some of the people these terms are being lobbed at. And, the fact that they are being used to cause as much damage as possible means the stigma is still real.

Last, let’s look at the way the media portrays different things happening to celebrities. We have seen the media jump on issues with Kanye West and, now, Mariah Carey. They have wondered what their mental state is and conjectured on their “meltdowns,” when the reality is that they have no evidence or reason to make such conjectures.

If we take Carey, for example, we see in the headline below that she is having a “Bipolar meltdown.” The real question is what this means. I mean, lots of people use drugs and drink too much who are not bipolar. If she is having a bipolar meltdown, wouldn’t it mean she was too depressed to get out of bed or so manic that she didn’t care about anything?

But, see, the headline sounds better and the meltdown more severe when it’s added that it’s because of bipolar – despite the fact that Carey has never admitted to having a mental illness and there is only conjecture surrounding such by people she does not really have anything to do with. So, we get another media portrayal of the terrible happening because of someone’s mental illness. A celebrity is melting down due to a mental illness that no one even knows if she has. And this is the sad part: people will buy this and read it and think they have an idea and think this is what mental illness is.

So, what’s the solution. I think, number one, is to be mindful of what we see. If you see someone talk about someone else being “insane” or “crazy,” say something.

I also think it is important not to buy or purchase stuff that perpetuates myths of mental illness. I will not be seeing Split and I did not by this National Enquirer.

Last, understand that stigma and discrimination exists and we need to do all we can combat it. It’s not fair to anyone to feel stigmatized or discriminated against and it is important to be supportive.