Safe Inside the Jam: Mental Illness and the JamBand Community 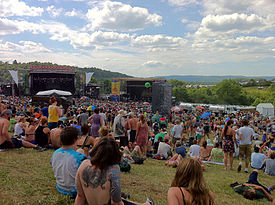 “Music has always been my protection against the world, from a very young age. I feel safe inside of a jam.” – Trey Anastasio, Guitarist and Vocalist for Phish

Like many people, I love Trey. Trey is a hero. I feel like Trey and I could be friends. However, I feel it for a different reason than many. You see, both of us hold something a little strange in common: we are in recovery. He, famously, is in recovery from addiction to painkillers and alcohol; I, much less famously, am in recovery from my mental illness, bipolar 2 disorder. And, like Trey, it is inside music, inside the “jam” that I feel the most safe.

This essay has no purpose other than my reflection on that recovery inside the very interesting world that is the “jamband” community. From what I can find, there have been no academic studies done on mental illness among jamband fans; as well, there isn’t really any supporting evidence for the jamband world being a boon to one’s recovery. So, I’m going to write about my experience and how the jamband community contributes to my recovery, or how I have found peace in and from the jamband world.

First, what does it mean to have bipolar 2 disorder? Bipolar disorder is a mental illness where the ill person experiences two very distinct moods. The first is mania, a time that can contain things like high energy, racing thoughts, feelings of invincibility, sleeplessness, hypersexuality, extreme spending, etc. The second is a deep, dark depression that usually leads to suicidal thoughts, or ideation. Bipolar 2 disorder is a form of bipolar that does not have moments of pure mania, but experiences of hypomania (or, what I like to call, not-quite-mania) and contains much more time stuck in the pits of depression. For the jamband community, Mikey Mirro, the original drummer of Umphrey’s McGee died of bipolar disorder.

Like I imagine it did with Mikey (and from accounts I’ve read, it seems quite likely), death haunts me. The depression that I experience with my bipolar causes me to come untethered to life, to relationships. I distance myself from family, from my wife and kids, from my friends. But, since I’ve usually bought a ticket beforehand, I still make it to shows (you can’t waste that money, am I right?). And I still listen to the music. And the music, both live and recorded, have kept me sane more than once.

As someone with bipolar (and mine “rapid cycles”, meaning I experience more than four major hypomanic or depressive episodes a year), my mind betrays me. In hypomania, I cannot keep my mind on anything for very long. I have ideas upon ideas and move to each with great earnestness. In depression, my mind stays stuck, like a scratched record. I simply ruminate on my pain and this leads to thoughts of death, which leads to further thoughts of pain and the cycle goes on and on. In both of these instances, music, especially “jam” music, is a saving grace.

In hypomania, my mind races. I have thoughts upon thoughts and I have to act on each one at that moment. But nothing gets done or happens because each thought is interrupted by another and another and another. In this cycle, I can’t stop. My mind never shuts down. It never focuses. But, I can still get lost in a jam. Recently, a favorite is Phish’s Tweezerfest (a show at Dallas’ Bomb Factory on May 7, 1994). For about the last year I have found myself immersed in the second set of this show. It starts off innocently enough. Then Tweezer erupts as the third song and we’re off as Trey and the boys move and weave Tweezer around a number of different songs by artists like Aerosmith, the Breeders, and Prince. In my racing mind, I can get lost in this. My thoughts do not have to fly by because the jam never gets stale and teases me. Phish never simply settles into a groove and plays but they keep it moving forward. My manic mind needs that. They surprise by bringing in stuff that should not be there. It works, just like my hypomania. It seems random, but makes sense. And it’s beautiful.

The physical community has also been a real benefit in these moments. The social media imprint of the community leads to avenues and places to discover and explore that are further and further out there. The ideas are endless. But the community also helps you stay focused on the task at hand, which is enjoying and living in the jam. When I’m hypomanic, I’m moving to the next thing all the time. The now is not enough. The community brings me back to the now. This has happened at shows multiple times, as I’m running from thing to thing and a head grabs me and just says, “Isn’t this unreal?” or “Can you believe they’re doing this?” And I have to stop, take a moment, listen, and usually end up lost in the jam. The community, by sharing life, brings me back to the now.

The community is also there when I am the opposite of hypomanic. When my depression sets in, there is a lot that happens. My anxiety kicks in and being around people is tough, if not painful. As the depression continues to set in deeper and deeper, my suicidal thoughts grip me and can paralyze me. But the community never lets me rest there. And I can give two such instances.

First, there was an Umphrey’s McGee “hometown” show in South Bend on Oct. 23, 2011. I didn’t feel up to going and offered my friend the tickets. He said he wasn’t going without me because I was a huge UM fan. And this is true as I’ve followed the band since their beginning days in South Bend and Notre Dame. He basically just said I had to go. When we got to the venue, the doors were not open yet and so we got some food, chilled outside and embraced the scene, not a huge scene but a good scene. Positivity, joy, good vibes. People were talking about what they expected, what they hoped for. It was like the prodigal son returning and we were all wondering what (t)he(y) would look like. Umphrey’s didn’t disappoint and played two songs that I love for the encore in Hajimemashite and Front Porch. Did it erase my depression? No. But it gave my mind somewhere to go, an out, for a few hours. It eased the pain.

Similarly, I was at the infamous Phish “rain” show in Chicago; no, not the one they cancelled, but the one on July 21, 2013, the Sunday night show (with the divisive “Second City Harpua”). I wasn’t super stoked to head up to the show because I was depressed. Even worse, I was by myself because, well, my friends just are not into this stuff. And, as the rain started, I could see the show getting cancelled. In fact, as Run Like an Antelope was cut short, I started to wander around, found no real place to go, and decided to jet. I was walking through the attendance gates and couldn’t move because so many people found cover there. It was there I met some dude from Madison who talked me into staying because, hell, it was Phish and a Sunday show. And you never miss a Sunday show. And I stayed and it was good and weird and now I’ve been to one of “those” shows. But it was a community that helped one another (there was a lot of helping under that tent) and leaned on each other. We stand each other up…because we gotta dance and feel the joy.

It’s ultimately the music that brings me back and gives me life in the midst of terrible depression. Two shows right now are places I keep coming back to. The first is the Umphrey’s “Improv” show in Madison, WI with Joshua Redman (Jan. 28, 2016). In the second set the band simply steps up to their instruments, asks for a key, and begins playing. They don’t stop until the end of their set. And what Umphrey’s does so well is to take you on a journey, with highs and lows, fast and slow, mixing genres, etc. Listening brings me into a space where I don’t have to focus on my pain, my hurt, my incredibly dark thoughts. I can simply follow the band. And this is what I really appreciate about the last show, which is the famous, newly (officially) released Grateful Dead July 8, 1978 show at Red Rocks. The Dead do something different for me on a whole. They are always there, steady. They don’t let anyone drop out, even when someone takes risks. Jerry would come out and do something crazy and the band would be there and catch him. And it’s probably because I just got the show, but I feel safe here. In my depression, the band catches me and keeps me steady; their groove becomes my groove. Their musicianship is beautiful and space-y and takes me in and gives me the safe place that I need. It all works together to allow my mind a place to go when it hits its darkest moments.